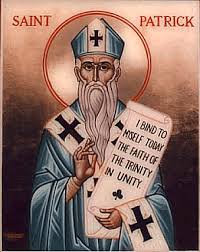 Patrick never chased snakes out of Ireland and we don't really know whether he used the shamrock to explain the Trinity. What he did accomplish over shadows any legends or myths of the man.

Patrick left Confession and Letter to Coroticus in his own hand. These Two documents are the basis for all we know of the historical Patrick. Confession was aimed at an apparently unsympathetic audience in Britain to defend his call and mission to the people of Ireland.. It is not a traditional biography.

He was born Patricius somewhere in Roman Britain to a relatively wealthy family. He was not religious as a youth and, in fact, claims to have practically renounced the faith of his family. While in his teens, Patrick was kidnapped in a raid and transported to Ireland. He was enslaved to a local warlord and worked as a shepherd until he escaped six years later.

Patrick returned home and eventually undertook studies for the priesthood with the intention of returning to Ireland as a missionary to his former captors. It is not clear when he actually made it back to Ireland or how long he ministered there. We know it was definitely for a number of years.

Thomas Cahill author of How the Irish Saved Civilization says, "The Patrick who came back to Ireland with the gospel was a real tough guy. He couldn't have been anything else—only a very tough man could have hoped to survive those people. I don't mean to say he wasn't a saint—he was a great saint—but he was a very rough, vigorous man."
Not surprisingly Patrick's own experience in captivity left him with a distaste of slavery. He would later become one of the first voices to speak out unequivocally against it. "The papacy did not condemn slavery as immoral until the end of the 19th century," Cahill says, "but here is Patrick in the fifth century seeing it for what it is. I think that shows enormous insight and courage and a tremendous 'fellow feeling. The ability to suffer with other people. To understand what other people's suffering is like." Cahill adds "He really is one of the great saints of the downtrodden and excluded—people that no one else wants anything to do with,".

Women find a great advocate in Patrick. His Confession speaks of women as individuals. Cahill points to Patrick's account of "a blessed woman, Irish by birth, noble, extraordinarily beautiful—a true adult—whom I baptized." In another passages he speaks highly of the strength and courage of Irish women: "But it is the women kept in slavery who suffer the most—and who keep their spirits up despite the menacing and terrorizing they must endure. The Lord gives grace to his many handmaids; and though they are forbidden to do so, they follow him with backbone." He is actually one of the first male Christian's since Jesus to speak well of women observes Cahill.
Cahill points out around the time of Patrick's death "the Irish stopped slave trading and they never took it up again. Human sacrifice had become unthinkable. Although the Irish never stopped warring on one another, violence became much more confined and limited by what we might call the 'rules of warfare."

"I think that though he probably died knowing that he had succeeded [in his mission]," Cahill adds, "he also died hoping that success would be permanent and not temporary." The fact is Patrick's success couldn't have been more permanent. Not only had he accomplished what he'd set out to do—convert the nation to Christ—but in the process he'd retrieved from obscurity the primary objective set by Christ for his apostles: the spread of the gospel to the ends of the earth.
Cahill makes the strong case in How the Irish Saved Civilization, that it is Patrick's conversion of Ireland that sets in motion the preservation of Western thought through the early Dark Ages by the Irish monasteries founded by Patrick's successors. When the lights went out all over Europe, a candle still burned in Ireland. That candle was lit by Patrick.

By converting the Irish pagans to Christianity without making any attempt to Romanize them he founded a new kind of Church. One that was both Catholic and primitive. Of Patrick's introduction of Christianity to Ireland, Cahill says, the faith was introduced for the first time into a culture free of the sociopolitical baggage of Greco-Roman civilization. Prior to Patrick's gift of the faith to Ireland, to be Christian was to be Roman, or at least to be a product of Roman civilization.

The conversion of Ireland sees the faith thrive in an entirely different environment. A culture in which, according to Cahill, there is a "sense of the world as holy, as the Book of God—as a healing mystery, fraught with divine messages." In this tradition, Cahill explains, "there is a trust in the objects of sensory perception, which are seen as signposts from God. But there is also a sensuous reveling in the splendors of the created world, which would have made Roman Christians exceedingly uncomfortable."As a result, Cahill says, "The early Irish Christianity planted in Ireland by Patrick is much more joyful and celebratory in the way it approaches the natural world. It is really not a theology of sin but of the goodness of creation, and intensely incarnational."

Since it was the Irish monks who served as the bridge between classical Christianity and the Middle Ages, medieval Christianity tends to reflect the celebratory nature of Irish spirituality rather than the gloom and sin-centeredness of its classical predecessor.Finally. Patrick gave the Irish himself, willingly, joyfully, proudly. He did this despite the fact that, even at the end of his life, "after aproximatly30 years of missionary activity," Cahill says, "he knows he's still living in a very scary place. You don't change people who offer human sacrifice and who war on one another constantly, overnight."

But change they eventually did. The example of his life—his courage, his intelligence, his compassion and his incredible, indomitable faith still lives on.

Cahill writes, "Only this former slave had the right instincts to impart to the Irish a New Story, one that made sense of all their old stories and brought them a peace they had never known before." Because of Patrick, a warrior people "lay down the swords of battle, flung away the knives of sacrifice, and cast away the chains of slavery."